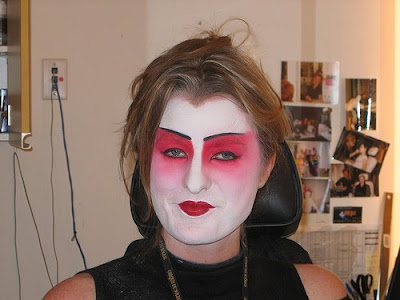 A few moons ago, in 06/07, I worked as an Artistic Talent Scout with Cirque du Soleil.
Today, they pull in for the first time ever to Dublin, with Quidam. Here is my article in today's Irish Times on them, and a couple of the things I learned (just a couple of them!) during my stint there. That's me over there to the right in the picture by the way, made up as a Geisha by Cirque make-up artists. Another day at the office in Cirque du Soleil! Here's a link to the actual feature too:


Reinventing the circus with human wonders

What goes on behind the scenes at the most famous circus in the world? DEIRDRE MULROONEY, who spent a year as artistic talent scout with Cirque du Soleil, reveals all

Who would have thought a bunch of happy-go-lucky hippy jugglers, stilt-walkers and fire-breathers known in 1982 as “The High-Heels Club” in Baie St. Paul, rural Quebec could give birth to one of the most successful entertainment companies on the planet?

Well, this is precisely what Gilles St. Croix and Guy Laliberté’s playful gang of dreamers have gone on to do. Tonight, at last, you can go and see for yourself what all the fuss is about as Cirque du Soleil pull in to our Republic for the first time ever at Dublin’s O2. “Quidam” (Latin for “Anonymous Passerby”, pronounced key-dam), one of their gems, now numbers among nearly 25 individual Cirque du Soleil creations, each one more mind-blowing than the next.

No wonder Guy Laliberté, the billonaire bright spark who is the source of this vision, is referred to as “Le Guide” back at their Montreal HQ. About to turn 50 in September, the bald former fire-breather/street artist, and now 95% owner of the Cirque du Soleil empire, states his aim as: “to contaminate the planet with good creative projects that suggest reasons to hope". World domination, in other words.

Cirque du Soleil’s winning streak was unleashed when, in a daring act, they brought their impudently titled 1987 “We Re-invent the Circus” to LA without sufficient funds for the return journey home. And re-invent the circus they did. Gilles St. Croix drew inspiration from The Bread and Puppet Theatre. Belgian director Franco Dragone brought his bag of European tricks from Dario Fo to Commedia dell’arte. Cirque du Soleil proceeded to infuse what seemed to many like a dying art with magical theatricality, original live music, song, contemporary dance, myth, Olympic standard athletes (the 1976 Montreal Olympics were an inspiration), charismatic and often quirky artists, fabulous hand-made costumes, artisan shoes, extreme make-up – and dream-like narrative.

“We re-invent the Circus” captured those trend-setting Californian hearts, and - hey presto - their wallets too. Not only could the French Canadians afford the petrol to get them home, but it set the Cirque du Soleil craze, which has spread across the planet like wildfire alight. First the visionary troupe with marketing-savvy took the USA, including, bit by bit, Las Vegas where they revolutionised the entertainment landscape. They now boast 6 resident shows there, each with its own massive custom-built theatre, including “Love”, their 2006 Beatles extravaganza. No cow is too sacred - Elvis is next.

Spreading their “contamination” further afield, Cirque du Soleil are now to be found roaming across 5 contintents simultaneously performing, and scouring the planet for quirky and amazing talent to put in their shows. Last year Tokyo got its own resident show - the Tarot-inspired “Zed”, directed by “Thirty-Two Short Films About Glenn Gould” director, Francois Girard, as did Macau - Asia’s answer to Las Vegas. Dubai is next on the hit-list. On the brink of their 25th show, from humble beginnings a quarter of a century ago, Cirque du Soleil has cast its spell over more than 90 million viewers worldwide.

What is this magic? Is there a secret to this prosperous creativity? Quidam, the endearing 1996 story of 12 year-old Zoë, who gets lost in a fabulous dream-like world gives a good taste of this extraordinary entertainment phenomenon. Its creator Franco Dragone also directed their first Las Vegas show, the classic 1993 Mystère, which sells out 10 shows a week in its custom-built 1,600 seater theatre at Treasure Island resort and casino to this day. Pushing the boat out as far as it could go, Dragone’s jaw-droppingly gorgeous 1998 swansong for Cirque du Soleil, “O” at the Bellagio, features a 1.5 million gallon pool and Olympic standard synchronised swimmers. Xanadu-like, even the clowns are scuba-certified, and exits are often underwater. Everything, including a grand piano which gets submerged, is waterproofed.

Since Dragone’s departure to create Celine Dion’s Las Vegas show at Caesar’s Palace, Cirque du Soleil has continued expanding its creative horizons too, collaborating with many renowned Quebec directors, like Robert Lepage on the $165m production “Kà”, and Dominic Champagne on “Love”, as well as American clown, David Shiner, on the 2007 “Kooza”. Always after the zeitgeist, and very choosy about who they collaborate with, they take creativity seriously enough to give it its own “Department of Creative Synergy”.

During my stint with them as as Artistic Talent scout in their Montreal HQ in 2006/’07, I learned that no performance category is too outlandish to go in the Casting bank – from Mountain-bikers (who take a twirl in “Love”), to world champion whistlers, to shoulder dislocation dancers.

Cleverly, the anonymity-inducing heavy make-up ensures there are no “stars” apart from the show itself. The young artist playing Zoë, in Quidam, for example, usually performs the role for about 2 years until she outgrows it. Contracts and conditions are excellent. There are on-site physiotherapists, pilates teachers, and even career coaches for those reaching retirement age, which of course approaches early for acrobats.

Their focus is firmly on the wonders of the human being. Instead of sad camels, or hungry lions, under Cirque du Soleil bigtops you will find well looked-after Olympic medallists at the height of their powers performing death-defying numbers that could have been dreamed up by Harry Potter himself. Indeed, Acrobatic Performance Designer André Simard, whose grey beard is reminiscent of Dumbledore’s admits “I fly a lot in my dreams”. As for clowns - from traditional Russian clowns like Slava (remember his “Snow Show” at the Dublin Theatre Festival?), to contemporary clowns of the Ali G ilk, and the renowned American David Shiner, these are the subversive and mischievous crème de la crème of the clown universe.

At frst glance, Cirque du Soleil’s Montreal HQ, the company’s beating heart, and home to 1,800 of their 4,000 employees does feel like a cross between Hogwarts, and Willy Wonka’s Chocolate Factory. Full of paradoxes and unlikely juxtapositions, administrative offices are wrapped around massive studios where the shows are created, and Olympic athletes given 3-month training sessions in theatricality and ensemble performance before being sent out onstage. Yes, there are standard work cubicles - but just lean over the photocopier in the busy Casting department (for example), and you’ll see acrobats rehearsing and contortionists bending their plasticine bodies into unimaginable shapes, under the patient supervision of attentive coaches.

Naturally, the place is oozing with Utopian, and sometimes Darwinian circus culture. Creativity is worshipped like an elusive, pernickety goddess at every corner. Vegetables grow outside the front door for consumption by the employees. Boardroom meetings in Cirque du Soleil HQ are often framed by trapezists flying past as they try out the latest in mid-air hand-to-hand manoeuvres at the other side of an interior window. There is no lack of corporate rigour here though, they are armed to the teeth with all the latest and most efficient management strategies. Cheek by jowl with this oft-criticised corporate conglomerate culture, some original members of the “High Heels Club” are scattered reassuringly throughout the building. The inspiring work aesthetic – even if you are no aerial artist yourself - is to never lose sight of the product you are part of.

Under the same roof, the Costume Department is a phantasmagoric haven of artisan industry. There they are, 400 of them, studiously designing, silk-screening, hand-painting, cobbling, wig-making, dyeing fabric, individually hand-glueing sequins, and lace-making as if their lives depended on it.

In the Casting Department, I was in the elevated company of a gold medallist acrobatic skier, internationally acclaimed trapezists, trampolinists (with trampoline moves named after them), Claude Vendette of acclaimed Quebec band Fanfare Pourpour, and Contemporary dancers from groundbreaking Quebec companies like La La La Human Steps, and Carbon 14 – to recall but a few of my 15 fellow Talent Scouts. As I write this, they are still scouring the world for that certain je ne sais quoi for which no remote village in West Africa or yuurt in outer Mongolia (known for its abundance in gifted contortionists) is too far.

It’s an eclectic, fun, and extremely hardworking world. Across the road in the Artist’s residence, you’d regularly rub shoulders in the lift with Russian Strong-men, little people of big talent, Indian singers, Chinese Diabolo-experts, and computer programmers-come-world-champion whistlers who had run away with the circus. In Las Vegas I even got to share a motel with Joey Arias, then transvestite star (even though there are no stars), of “Zumanity”, and close friend of Andy Warhol’s.

So – ready to be “contaminated”?

Deirdre Mulrooney is currently Visiting Fellow at Gradcam (www.gradcam.ie) in Performance. Her book, “Irish Moves, an illustrated history of Dance and Physical Theatre in Ireland” is published by the Liffey Press.

• Renowned for his fabulous lifestyle, Laliberté a collector of classic cars, from custom Bentley’s to Aston Martin’s, and hosts a legendary A-list annual Grand Prix weekend party in Montreal.

• Cirque du Soleil have thrived without subsidy since 1992.

• Cirque du Soleil allocates 1% of its revenue to charities and good causes, including “Jeunesse du Monde”, their own “Cirque du Monde” and “One Drop” foundation.

• Quidam showcases approximately 250 costumes, 500 costume accessories and 200 shoes. The average age of the cast is 28: the oldest artist is 52, and the youngest is 12.

• Quidam has toured the world for the past 13 years, playing to over 9 million spectators.
Posted by Deirdre Mulrooney