VULGO.ie interview with Colm O'Grady of Clowns without Borders, Ireland 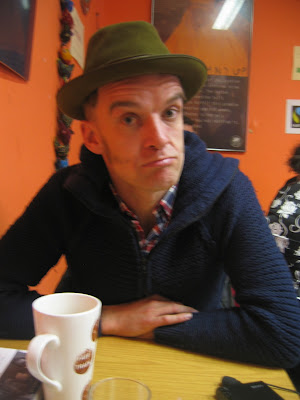 I met Colm O’Grady, ‘the best juggler in Inchicore’, and Winner of the alternative Miss Ireland ‘poise’ award, near Druid’s rehearsal space in Galway on the first morning of rehearsals for an upcoming “Clowns Without Borders” expedition. Clown Timmy Hannington arrived in from Belfast; Clown Rachel Devir from Letterkenny; and Clown Jonathan Gunning, founder member of Clowns Without Borders – Ireland, from just outside Galway.

The clown equivalent of the international medical and humanitarian aid organisation ‘Medecins sans Frontieres’, ‘Clowns Without Borders – Ireland’, is funded by Culture Ireland, and private sponsorship (pub-quizzes, fundraisers). Their maiden tour in 2006 was to Nepal where they worked in 7 refugee camps, often performing to 4,000 people ‘with one microphone and some antennae speakers’, liaising with local orphanages and NGO’s. Colm O’Grady recalls it as a ‘life-altering’ experience’. Bringing ‘psycho-social relief’, it firmed them in their resolve ‘to bring laughter and joy to communities and people in crisis’. They felt an affinity with refugees, and sought out countries ‘where people had been displaced’ – Nepal, Uganda, and, closer to home asylum seekers and refugees here in Ireland.

‘I’ve got a lot of experience of being in bad areas, and am very attracted to all the places you are not meant to go’, explains O’Grady. Over a decade ago, at the age of 23, O’Grady dropped out of nursing school in Bournemouth, and began travelling the world. Before long, he found himself wandering into Jerusalem’s Arab Quarter with a vague utopian wish to make the children laugh.

It all seemed to be going horribly wrong when the throng of children who gathered around him began to stone the pale, lanky stranger. However – Colm picked up the big rocks as they fell from his body, and ‘then I started juggling with them. The stones coming at me started to change velocity’.

Bemused, the children stopped and stared. Curious, like children everywhere, they joined in the stranger’s game. Soon, O’Grady was in their homes, helping them with their homework, and teaching them an array of circus tricks.

When at home, he offers workshops like the one he tells me about in Finglas, where as soon as he walked in to the room he was told to ‘f*** off’ by one charming participant. By the end of his session, O’Grady had the same boy wearing a stupid hat, juggling, and imploring him ‘Aw mister, mister, look at me mister!’ Working out of Beflast Community Circus, where he is a sometime teacher, he found himself teaching juggling and unicycle in the hall of the Maze Prison.

The day I first met him, Colm O’Grady was looking for Ugandan songs, to incorporate into ‘Lost’, a show about a lost football team, for a month long North Ugandan tour into Lira, Pedar, and Gulu. Liaising with the UNHCR (who requested that they address the topic of landmines in their show), that itinerary took them, their Giraffe unicycle, and array of puppets around ‘areas that the guidebook tells you not to visit because it’s full of refugees and there is nothing to do, precisely where we want to go’. They performed two shows a day, and gave workshops. Among others they worked with a group of girls who had been abducted, and sexually abused by the LRA, ‘doing workshops to try and encourage eye-contact… There are a lot of problems with shame, and through circus and acrobatics they will gain self-esteem’.

Clowns Without Border’s mission is simple, to: ‘give children back their childhood’.

O’Grady has performed in Barabbas’s hit show “Circus”, in the Tassel Club, at the Sugar Club, as a guest act in La Clique, in Spirit nightclub, and has devised own shows, ‘Grandmother’, the award-winning ‘anti-glam’ Salivation Army Granny & band. For more details see www.ouchentertainment.com.

Follow their latest diary, from Somalia, here on VULGO.
For more details about their great work visit Clown Without Borders – Ireland.
Posted by Deirdre Mulrooney