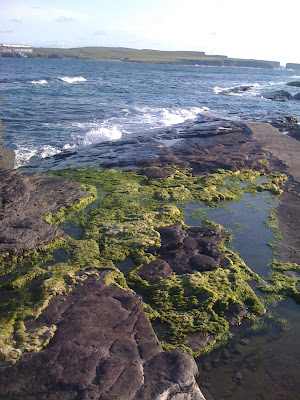 Documentaries have been made drawing parallels between pilgrims bathing in the Ganges river in Varanasi, India, and swimming in Dublin’s Forty Foot. But I wouldn’t dare mention those pretentious theories to the down to earth swimmers of Byrnes’s Cove, Kilkee, County Clare. You know what you have to do but you just don’t talk about it. Jump in. Get moleculary rearranged. Say “lovely”.

Blue lips, purple skin with orange polka dots, goose-bumps… Baywatch, eat your heart out. These attractive hues and skin-textures may sound like the description of a corpse, but no, coupled with a triumphant smile, and the grab for a towel, you’ve got ‘the look’ of emerging from Byrnes’s Cove, swimming mecca.

To the uninitiated onlooker this practice may well appear like a strange native masochistic ritual, but for regulars, whose forefathers have been coming here for generations, this icy dip is heaven. No, really.

Until recently though, “Byrnes’s” (as it’s referred to in local parlance), was one of those men-only, ‘women out’ precincts, frequented by Earnest Hemingway types like my own father. That was, until people like sprightly aunties and their ilk started showing up, brazenly reclaiming one of the best bathing spots on our planet.

I myself was once confronted with a naked man on the slip-way. (I, of course, as a past pupil of Cahercon Salesian Secondary School was modestly attired). He stopped for a friendly chat. “My father swam here, my grand-father, and my great-grandfather before him”, he declared. “Really?” I responded, keeping my gaze above his (imaginary) belt. “So did mine”.

Then, in honour of the aforementioned ancestors, I tried to make as little of a song and dance about getting into the icy water as humanly possible. (It’s not unusual to get stuck with waves lapping at knee-level for a good five or maybe even ten minutes before mustering up the courage to take the plunge).

But, if you’re lucky enough to get caught in a sunbeam (sunbeams do happen), out there where sky and sea meet, drifting out into the middle of the bay, it can feel mystical. Then there is that psychedelic green of the seaweed. Just around the corner, I hear there is another swimming spot called ‘paradise’ which reveals itself only at certain rare confluences of tide, gravitational pull, and phase of moon. I haven’t found it yet, but it’s on my to-do list.


Life here revolves around tide tables. There’s a time for the Pollack Holes (the natural sea water pools across the bay, which emerge when the tide is out); a time for Byrnes’s (high tide); for Myles’s Creek; for the boards; for the strand. Days are spent chasing the tide around Kilkee’s perfect horseshoe bay from one swimming spot to another. Running into seldom-seen cousins from near and far-flung places on the prom, the conversation revolves around ‘how many swims have you had?’. There’s bravado, boasting, peer pressure, and, yes, competition.

The cold concrete, then the cold, wet stones underfoot. The ice bucket that is the chilly Atlantic lapping around your ankles, then your knees, then slowly, bit by bit, the whole way up until you stop at your hips and wonder: ‘Me? In there? I don’t think so’. You feel the fear and do it anyway. Suddenly, you are back to the basics of who you are, humbled and invigorated by the mighty Atlantic.
Posted by Deirdre Mulrooney