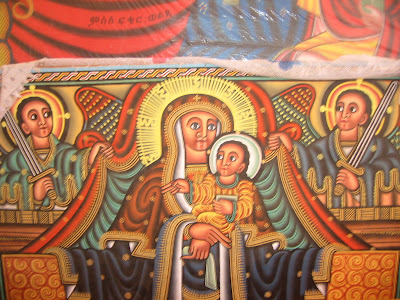 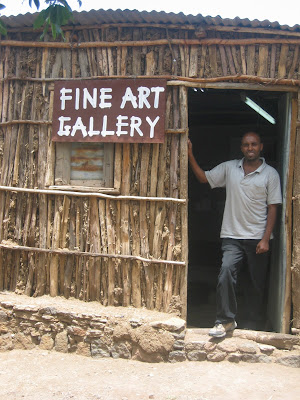 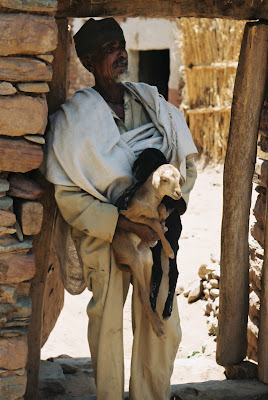 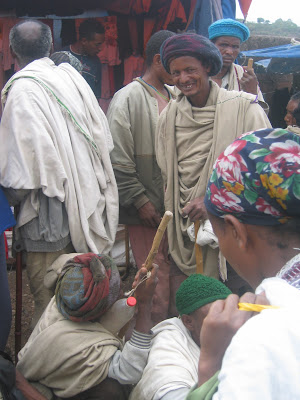 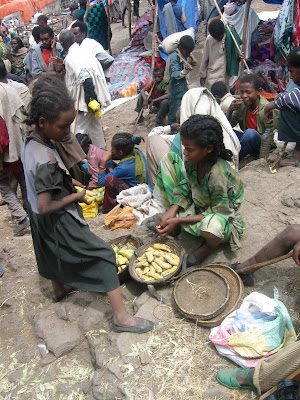 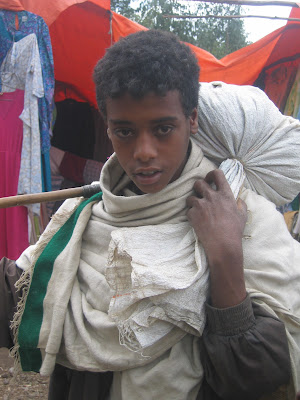 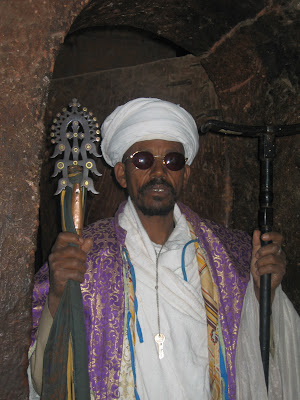 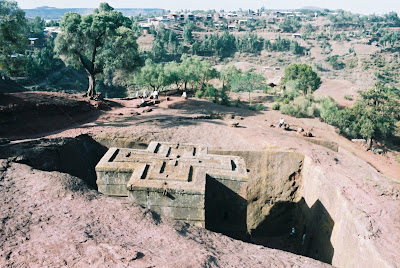 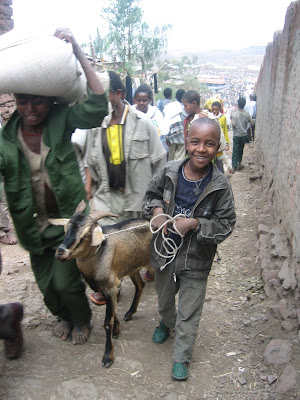 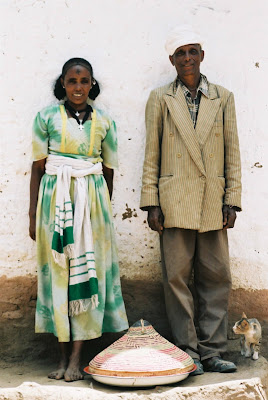 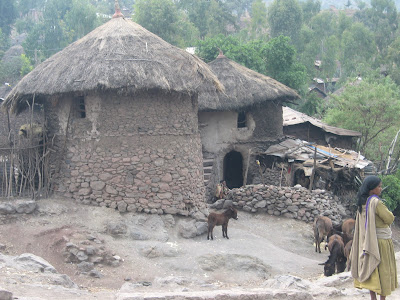 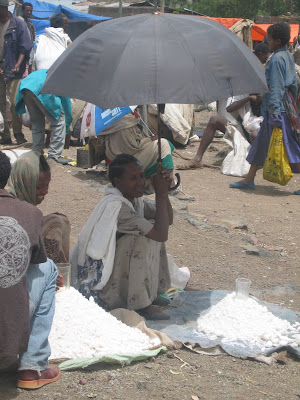 When I was out for dinner at Marco Pierre White's new Dublin Steak House (yum!), last week the subject got on to my travels, and one of my favourite topics - Ethiopia. I informed my lovely fellow diners that is a wonderful place to go as a tourist. They were amazed. "Nobody ever told us that about Ethiopia", they said. Of course not! - that's not the media image we are fed (excuse the pun - but it's a good one). So in case you're thinking of an offbeat and eye-opening time-shuttle holiday, here are some of the things I discovered while I was there:


Ever wanted to turn the clock back?

Tardis-like, reaching remote Lalibela in Amharaland, Northern Ethiopia feels like landing in medieval times. Despite the 4 X 4 that picks you up from the airport, the time-warp feeling is partly for real, too, as here it is 2001, making you, yes, 8 years younger. (When we adopted the Julian calendar, contrary Ethiopia, which also has its own alphabet, stuck to the Gregorian). To be in step with the locals you’ll also have to synchronise your watches to the daylight-driven Ethiopian daily clock: our 7am is Ethiopian 1am, their 1pm our 7pm. There is so much more to this wonderful country than our limited image of famine.

Take Lalibela, Ethiopia’s answer to Petra, named after the 12th century King Lalibela who dreamed up this ‘new Jerusalem’ after a visit to the Holy Land. He built 11 rock-hewn churches after a 3-day drugged sleep (his sister tried to poison him) in which ‘the angels’ allegedly showed him how. Carved out of one single piece of rock, their interiors strike a romanesque pose, making Lalibela a UNESCO world heritage site. When I asked my guide, Goshu, who repeatedly smothered priests’ hand crosses in kisses as we proceeded from one church to another ‘who really built the churches?’, he looked at me, all incredulous, before conceding, matter-of-factly ‘well, King Lalibela was helped by the angels’. Ethiopian Coptic Christianity is deep and extraordinary, and these mysterious churches function as the living breathing heart of this community. Masses last 5 hours with standing room only.

With your shoe-bearer in tow, as you progress from one church to another, spread over two complexes separated by a symbolic ‘River Jordan’, don’t be scared if you brush past spooky shrivelled-up pilgrims’ bones protruding from the occasional crevass. Within the churches, priests emerge, troglodyte-like out of the shadows of the ‘holy of holies’, and pose for tourists with the church’s own specific cross. In Saint Golgotha church, a good-natured priest holding King Lalibela’s original processional cross in one hand, and praying stick in the other, donned groovy shades to protect his eyes from my flash.

Mobiles don’t work, and it’s difficult to get an internet connection, This brought on mellow moments, reclining on a pair of reincarnated bus-seats taking in the village din and spectacular mountainous backdrop from my Jerusalem Hotel balcony (just like I imagine former visitors Bob Geldof and Brad Pitt did too). But, always a spectre, across the road is an abandoned warehouse with a faded red cross on it – an erstwhile food distribution centre during the 1984 famine. Things are better now, thanks, in some way, to the tourist industry.

A bumpy two-hour drive out to 11th century rock-hewn church Yimrahim Christos, tucked like a ginger-bread house under a remote rock, complete with bats, and a pile of pilgrims’ bones, brought us through the spectacular Lasta mountain landscape. The road was lined with locals trudgng for miles and miles to and from the market, lugging things. Bustling Lalibela Saturday Market, with its sugar cane, chat (a local hallucinogenic leaf), mounds of salt and other wares was a welcome break from all that extreme religion.

A short flight away, you’d never guess that modest Axum was one of the most important and technologically advanced civilisations of its time. Christianity took hold in this fascinating place of pilgrimmage for Ethiopian Coptics, who believe that the Ark of the Covenant (the ten commandments), is in the little chapel next to St. Mary of Zion church in 330 AD – before Rome. Keeping up the mystery, the only person allowed in to verify that is a camera-shy priest in yellow (see picture).

But who needs scientific proof, when you’ve got madcap theories? Graham Hancock’s ‘The Sign and the Seal’, offers fascinating explanations involving the Knights of the Templar, the opera Parcival, the holy grail, and even the freemasons - making the Da Vinci Code look unimaginative. For a Hollywood version, there is Raiders of the Lost Ark.

It all started in the 10th century bc, when Menelik, the illegitamite son of King Solomon and the Queen of Sheba allegedly brought the Ark back home to Axum. This Ethiopian royal dynasty lead from there right down to the flamboyant Hailie Selassie. Axum is so ancient that farmers often stumble upon valuable archaeological treasures while just out ploughing their fields.

Axum’s mysterious obelisk-field – the world’s tallest obelisks carved from one piece of rock - made me think of Newgrange. But the guide had heard neither of Newgrange, nor of Stonehenge. We can feel free to invent our own theories, as even Prof. Richard Pankhurst, founder of University of Addis Ababa’s ‘Institute for Ethiopian Studies’ who I visited for coffee and biscuits in the ronadavel gazebo in his Addis back garden doesn’t claim to know the answer.

He did however get the 24 metre obelisk, pilfered by Mussolini in 1937, back from Rome (albeit in three pieces), in 2005. Now impatient to stand it up again, he’s also campaigning for the return of a 1930’s Ethiopian airplane from Rome’s aviation museum, and ancient Ethiopian manuscripts from The Chester Beatty Library and Trinity College, Dublin – ‘on microfiche please’. Pankhurst who claims to have been here ‘since Lucy’s funeral’ (‘Lucy’s’ 3.5 million year old skull was found in Hadar in 1974), is the son of lefty feminist Sylvia Pankhurst, whose support of the Ethiopian cause earned her a state funeral in 1960. Sylvia upset her mother, sufragette Emmiline Pankhurst, when she refused to marry Richard’s Italian father, on the grounds that she would never take any man’s name, or sign a marriage contract, on priniciple.

Back in the capital, what I thought was Islamic chanting blaring out from a Friday Mosque woke me. But it was Sunday, and this was Coptic Christian liturgical singing throwing its weight around. Addis Ababa, which means ‘New Flower’ in Amharic was founded on a whim in 1887 by the empress Taitu when she decided to move down from the nearby chilly Entoto hilltops, to spend more time in the spot’s natural hot springs. You can still stay at Hotel Taitu, Ethiopia’s down-at-heel (there was no water the night I stayed there) first hotel, where the Empress first taught her guests the concept of paying. From this remnant of former splendour to the fabulous five star plus Sheraton Hotel (Addis Ababa’s answer to the Four Seasons), this great crossroads between Middle East, Africa, and Europe offers the full gamut in terms of accomodation, nightlife, food, and ‘Merkato’, Africa’s largest open-air market. And it’ll take years off of you – eight to be precise.

Irish Aid, Ethiopian Quadrants, and the one and only Tony Hickey:

By visiting Ethiopia, not only are you having a wonderful trip, but you are also boosting the Ethiopian economy and creating jobs. Irish Aid, which is not just about relief, but about economy building, is planning to fund a 12-part tv series to be broadcast on Ethiopian television trouble-shooting, and promoting the tourist industry. Tony Hickey, the London-Irish ‘tourism activist’ behind it, has been married here to his Ehtiopian wife Terhas Mamo for over 33 years, and fancies Ethiopia emulating what the Irish tourist industry did for Ireland. Known to many as Ethiopia’s Crocodile Dundee, Hickey looks like he has lived in the Sahara desert for years, and he probably has while with the Tigray People’s Liberation Front during the Mengistu regime. In 1968 he took part in Civil Rights marches in Belfast before doing Middle Eastern Area studies at University of London’s School of Oriental and African Studies and moving to Saudi Arabia, where he bought a car and started his career in tourism, showing visitors around. An elected Board Member of the Ethiopian Tour Operators Association, he and his wife have their own travel agency, ‘Ethiopian Quadrants’, and part-run an eco-tourism lodge in the Afar region. www.ethiopianquadrants.com

• So, you want some sauce with your chopped green chilis? Ethiopians eat extremely hot meat or vegetable sauce with grey-ish flat, spongy, fermented injera bread, made from local grain Tef - an acquired taste.

• Due to altitude and proximity to the equator, the temperature hovers pleasantly between 20 and 25 degrees Celsius (just a rainy and dry season). Any place above 2500 metres is malaria-free due to the altitude.

• €1 = 10/11 birr. It’s very rare to find a place that accepts credit cards, even in Addis Ababa. There are no ATM’s, the only place to get cash on your credit card is at the Sheraton Hotel.

• For the famous ‘coffee ceremony’ (Coffee originates in ‘Kaffa’, in Southern Ethiopia), which entails sitting around for a long time drinking 3 cups of coffee from the same grains try Yeshi Buna coffee shop, or even ‘Arkie’s Business Centre’ in Piazza’s former Tigrai Hotel.

• Safety: Benign scammers who invite you back to their house for a coffee ceremony (don’t do it!), are about as tricky as it gets in this non-threatening place you can really feel at ease in, unlike in other African cities like Johannesberg or Nairobi

• Try the Crown Hotel, for an array of unique Ethiopian dance styles - all rhythmic shoulders and head-banging meets l’Oreal ad.

• Go to an Azmari Bait, a traditional public house where the singers sing about the world and their audience, in the ‘wax and gold’ style of the royal courts. We went to Taji Bait, but there are hundreds such places in Addis.

• Listen out for ‘Ethiopian groove’ in the Ethiopiques series produced by French Francis Falceto of www.budamusic.com.

• How to get there: KLM via Amsterdam, Ethiopian Airlines (Africa’s oldest indigenous airline), Lufthansa via Frankfurt, from €770 approx. return. Try Concorde Travel (01) 8727822,

Email ThisBlogThis!Share to TwitterShare to FacebookShare to Pinterest
Labels: Holiday in Ethiopia