Turning the TIde on FGM In Ethiopia - Bogalech Gebre 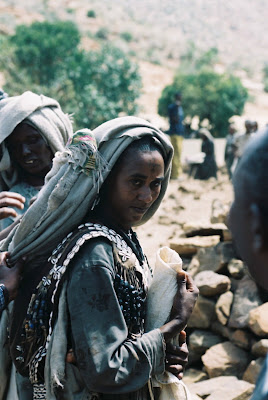 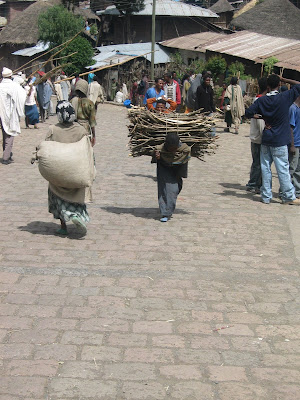 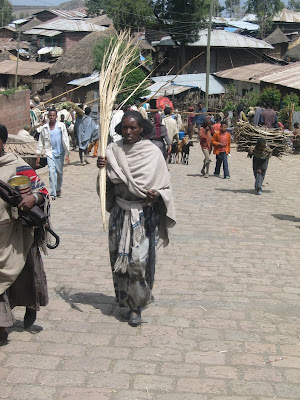 The rather gruesome topic of FGM came up at a dinner-party I was at last weekend,
thanks to the Pamela Izevbekhai coverage lately (she's applying for asylum in Ireland on the basis that her daughters will be subjected to FGM if she returns to Nigeria, and that another daughter of hers died as a result of FGM), and in particular Ruadhan Mac Cormac's feature in last Saturday's Irish Times (p. 4. Weekend Review). It's simply unthinkable for us here in the West, but in Africa, they really need some extreme feminism to tackle this horrific manifestation of misogyny (hatred of women), and, of course, with that, immense fear of women. Right, see some photographs I took of Ethiopians in Lalibela, and Tigray, Northern Ethiopia. When I was in Addis Ababa, I had the extreme good fortune to meet an amazing Ethiopian woman who is succeeding in turning the tide on FGM. Bougalech Gebre's Kembatta Women's Self-Help Group is a heartening story, of change from within (the only kind that will work in this culturally sensitive area, in my opinion):


The one thing that struck me on my 12 day trip Ethiopia was the plight of women. It just left me feeling a little uneasy. There they were, doubled over, lugging firewood, water, foodstuffs for miles and miles to the market and back. Something was just not quite right, and I couldn’t put my finger on exactly what it was. One Irish Aid worker told me how ten years ago she was trying to convince rural village men to invest in donkeys to carry things for them. One asked ‘why would I buy a donkey when I have a wife?’ She says things have improved since then, but still Ethiopia is 142nd out of 146 countries in the UNDP gender-related index.

It wasn’t until the day I was leaving though, that I discovered the real story behind my uneasy feeling, when I visited Addis Ababa’s Fistula Hostpital, and Bougalech Gebre, who unusually was in the Addis Ababa Kembatta Women’s Self-Help Centre, which she founded in 2000.

This was when I heard about the things you don’t see, such as the fact that 9 out of 10 Ethiopian women are circumcised between the ages of 6 and 12, so they will be considered ‘marriageable’. I didn’t hear about it, because it’s taboo, and the women perpetrate it upon themselves. But there is hope, and change afoot.

Visionary women’s health activist Bogalech Gebre has ignited a cultural revolution 350 km south of Addis Ababa with her Kembatta Women’s Self Help Group. Not only has she broken the taboo on this sometimes fatal widespread practice known locally as ‘removing the dirt’; but she has also created consensus within her community that it is harmful, and must be stopped. The first girl in her village to get beyond grade four at school, she went on to be a Fulbright Scholar in the States where she became a Public Health expert, before eventually returning to her home community on a mission.

Flanked by Kembatta Women’s Self Help Group, the first marriage of an uncut girl took place on Ethiopian Television in 2002. The bridegroom wore a placard announcing ‘I am happy to be marrying a whole woman’. The bride’s read ‘I am happy to be married uncut’. During October, traditionally ‘harvest time’ when the communities celebrate the newly circumcised girls, instead men and women in their 100,000’s are now celebrating ‘the whole body’. Ready to upscale her mission, this tide is set now to sweep the country,

How did she do it? Exposing the myth that this harmful practice is condoned nowhere in the Bible or in the Koran, Gebre’s approach is to let the community build consensus themselves. ‘Those who practice female genital mutilation do so believing it is in the best interests of girls’, she says, as only someone who grew up in that community, and went through the procedure herself could. She was 6 years old, and her mother had to leave the room, as all mothers do. ‘This belief must be stopped’. But how?

Movies were shown in rural areas on the back of a pick-up truck on a generator-run video recorder showing an actual cutting. Men in the audience fainted. Schools were built for the education of boys and girls, incorporating awareness of FGM, alongside their regular education. Thus bit by bit, accessing the deep psychic life of the region, and letting them take ownership of their decisions themselves, Gebre worked, and works on the basis that what is good for women is good for everyone.

Aside from its monetary problems, if Ethiopia is to have half a chance at achieving its full potential, the whole empowered woman must be re-introduced to the equation. Thanks to Gebre, this is a process that is already underway.

* this was picked up and published in the "Ethiopian Review" - here's a link:

& here's another "in progress" piece that has been living, albeit forgotten, in a file on my computer for a while now. Isn't this what BLOGS are for? :)


I am so glad that on my last day in Ethiopia, I got a taxi out to visit Bogalech Gebre to hear how she has quietly ignited a culutral revolution

I listened to her good news story at her Addis NGO office the Kembatta Women’s Self-Help group. Kembatta is the name of the area where she grew up, in southern Ethiopia. She was the FIRST girl in Kembatta (south of the capital, Addis Ababa) to get beyond Grade Four (fourth class) in school

Now Bogalech Gebre, after going on to be a Fulbright scholar, and finding her way to Berkely university where she became an electronic engineer has come home to set a revolution in motion. Real change is afoot.

She may have been living in liberal California, but she could never forget the homeland she grew up in where nine out of ten women are circumcised. Indeed, the women perpetrate it upon themselves, even if the mothers have to run out of the room while their 6 or 11 year old is being cut by an old woman, with special unsterilised knives for the job. ‘No mother can watch their child being hurt’, says Bogalech, who recalls her own mother uttering ‘this shameful practice must be stopped!’ when it was her turn. One day, Bogalech stood up in front of a hushed Stanford lecture hall and told the story of her own mutilation. Two of her sisters died from the ‘operation’. Others die later in childbirth due to the scarring. Yet there is a big festival prepared for girls when they go through this rite of passage. The whole community participates, and the girls themselves are keen to have the operation to accede to the adult world of cut women.

Bogalech’s approach was first to gain consensus in her community by showing her fellow-Ethiopians that it is a totally unecessary operation that has no foundation in either Muslim or Christian religions. \We have succeeded in breaking the silence’ explained Bogalech. The operation is referred to as ‘cutting the dirt’. Many girls died during the operation, but they all wanted to have it done because otherwise they risked ostracisation from the community, and would not be considered to be marriage material for any local boy. Without the operation, they are considered to be ‘too unruly, and out of control’ explained Bogalech who is herslef a victim of this practce which she is now educating her community about. She teaches them that the practice is condoned nowhere in the bible or in the Koran.

Her work has shown fantastic results. The first wedding of an ‘uncut’ woman took place in 2002 – on national television. The bridegroom wore a placard around his neck reading ‘I am very happy to be marrying a whole woman’. The bride’s placard read ‘I am very happy to be getting married uncut’. In 2004 100,000 people, men and women, demonstrated in celebration of ‘the whole, healthy body’. The demonstration tok place at the end of October, traditionally ‘harvest; time for the newly circumcised girls, in which the whole community celebrates this so-called rite of passage to womanhood.

Schools are being built for the educations of girls – and boys – in these matters alongside their regular education. Gebre is also literally lightening womens’ loads by devising new methods of water carrying. Women doubled over with loads of firewood or water on their backs, walking for miles to bring them home or to the market is a regular sight in Ethiopia. One Irish Aid worker who was here in the early 90’s recounted how she was trying to convince some village men to invest in donkeys for carrying things, when a man piped up ‘but why would I need a donkey when I have a wife?’. On the bright side, that attitude is changing now, women are speaking up, expressing themselves more, and taking steps on the road to equality.

But change can only come from within the community, from people like the extraordinary Bogalech Gebre, who began this journey when she stood up in front of a full-lecture hall in Stanford university and told the story of how she was brutally cut at the age of 6. Her mother had to leave – no mother can watch their child being hurt, she says – and she remembers her saying ‘this custom must be stopped’. It’s a custom unfounded in any real tradition.

Based on the success she has had in the South, Gebre is keen to spread her work across Ethiopia. Change is possible – from within the community – but you need a person with vision to ignite a cultural revolution. A person like Bogalech Gebre.

It’s so much better for the men too because they have a partner instead of a possession.

They put up a screen on the back of a pick-up truck in the countryside, and showed a circumcision taking place. Many in the mostly male audience fainted. This is how, through raising awareness that Bogalech Gebre is empowering her people to change the tide – themselves.
Posted by Deirdre Mulrooney