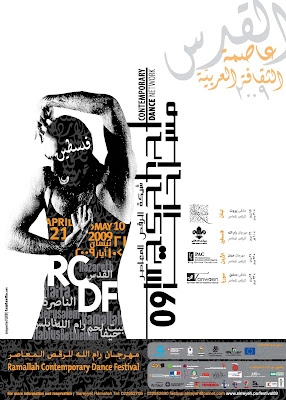 “Dance First. Think Later. That’s the natural order.” Ramallah Dance Festival 2009, made me think of Lucky's utterance in Samuel Beckett’s play “Waiting for Godot”. In this case I was the lucky one, to be there with Irish Modern Dance Theatre, who, supported by Culture Ireland, were touring their zany and joyous choreography “The White Piece” to Ramallah, Bethlehem, and Haifa.

First impressions? Upon arrival, our phones bleeped, poetically: “Marhaba. Smell the Jasmine and taste the olives. Welcome to Palestine”. Instead of hassle, as we walked down Ramallah’s bustling streets a chorus of “welcome”, and “you are welcome” wafted towards us on the warm air. One emotional tea-shop owner even hugged choreographer John Scott and cried, saying “I don’t want your money – thank you for coming to Palestine”.

I guess they don’t get a lot of tourists here.

We found ourselves in an open-minded place, where culture is revered, women are unexpectedly empowered, and Christians co-exist easily with Muslims. Khaled Elayann, the softly spoken Director of Ramallah Contemporary Dance Festival, for example, who is Muslim, is married to a Christian.

When I interviewed him, it was me who veered eventually from the topic of dance to “so – does the conflict here ever impact on the festival in any way?”. He mumbled something about having to cancel performances sometimes out of respect. “What do you mean?”, I prodded. “Like if someone has died”. “Really? Could you give me an example?” He spoke on in a vaguely inaudible fashion, that had me repeating ‘what?’ and sitting on the edge of my seat. They had to cancel the first show of this year’s festival, in Jalazon Refugee Camp, where Scandinavian “Public Eye” dance company had been working with the locals, creating a choreography called “Vertical Exile: West Bank Dreamer’s Pass”. On April 19th, the day it was to preview, a little boy involved in the production had been playing within gunshot range of nearby Israeli Beit El settlement, and was shot dead by a settler. So, (to answer my question), out of respect, they canceled that night’s show. It happens. A week later, the boy’s friends were bussed to Dheishish refugee camp, where the show went ahead, without the boy.

What seemed unbelievable to my Western ears, apparently was an unremarkable event, just par for the course here. I double-checked it with French Photographer Eric Boudet who had been in Ramallah for the entire month giving a dance photography workshop. Boudet shook his head when I alluded to the unfortunate boy, saying “He was only nine years old”. Despite my efforts, I found no trace of the incident, or the boy’s name either in the press or in general conversation.

And the dance went on. While Irish Modern Dance Theatre were giving workshops, and rehearsing, I sat among happy children from the refugee camps in Ramallah’s charming 350-seater Al Kasabah Theatre enjoying “The Jungle Book” by Washington DC based “City Dance” company. (Cheering these children up is part of the festival’s remit). The previous day, the American company had been held up for almost 8 hours at the Jordanian border, en route to Ramallah.

On May 4th, when John Scott’s powerful post-modern choreography “The White Piece” premiered, it was lauded as the most radical of all 18 dance companies at the festival – from America, Scandinavia, South Korea, and all over Europe to Algeria. His eclectic cast featured renowned Irish and international contemporary dancers, versatile young Palestinian actress, Riham Isaac, and new Irish survivors of torture who he found through Dublin’s Centre for the Care of Survivors of Torture. Ugandan-Irish survivor of torture Immaculate Akello made a moving connection with the audience after the show when she spoke of her first-hand experience of the effects of war on mothers and children. Scott drew parallels with Northern Ireland.

John Scott says that he has been “electrified” by the creative energy he has experienced here, since his first trip to Beit Jala in 2008 to choreograph dance film “Eternal” with film-maker Steve Woods. Scott has also performed in many Holocaust choreographies, and is careful to praise the many Jewish achievements – especially those of Karl Marx.

Elayann, himself a lefty choreographer, underlined that Ramallah Contemporary Dance Festival is an NGO, aligned with neither Fatah nor Hamas. Yes, he has indeed been invited to participate in a dance festival in Tel Aviv. But “even if they were from the left parties”, he cannot entertain the possibility of cultural exchange with Israel until there is a Palestinian state.

That could be like waiting for Godot. But in the meantime, like Lucky, in Beckett’s famous play, at Ramallah Contemporary Dance Festival they are throwing their arms up in the air, and dancing. I can’t help thinking that Beckett would have been proud, could he have seen Irish Modern Dance theatre in Ramallah’s Al Kasabah theatre, dancing their strange, and beautiful dance.
Posted by Deirdre Mulrooney