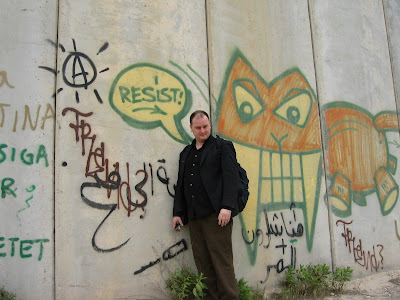 FYI - here below I quote some information from Wikipedia on the controversial wall between Israel and Palestine, 3 times higher than the Berlin wall, over 425 miles long... It certainly is a depressing structure. We took a mid-morning jaunt to Kalandia checkpoint, the military checkpoint where Palestinians with permits can leave Ramallah for work, medical care, education, or religious reasons. We were at Ramallah Dance Festival for a few days, and thought it would be educational to pop over and see this phenomenon first-hand. Plus, apparently subversive graffiti artist Bansky (www.bansky.co.uk) had left his mark here. His simple and dreamy spray-paint drawing of a little girl with pigtails being lifted off the ground by a bunch of balloons, hopefully over the wall, is really very poignant. I guess someone else added the "Sister you need more" beside it. They sure do deserve a lot more. Bansky said the wall transformed Palestine into "the world's biggest open-air prison". We certainly take our immense freedom and the respect of our human rights for granted in the Western World. Seeing these frankly unbelievable conditions first-hand really drives this home. How can this be? Well, the mind boggles. As well as the thoughtful IMDT crew, here further down are two lovely little girls, Sally and Suha, who befriended me in the wonderful Za'rour restaurant. They didn't have any English but they smiled a lot and gave me flowers. And then there is Jessica, a friendly Canadian/Palestinian journalism student who struck up a conversation in "Stars and Bucks" cafe (www.starsandbuckscafe.com), where I chilled out for a few hours on the day I was leaving to return home where things make a lot more sense. Returning to the land where things make sense again! (It's good to be here). Seeing is believing - it was an immense privilege to be there and witness the reality on the ground. Hopefully one day this will be a thing of the past. One day!


In October 2003, a United Nations resolution to declare the barrier illegal where it deviates from the green line and should be torn down was vetoed by the US in the United Nations Security Council.[80] In December 2003, resolution ES-10/14 was adopted by the United Nations General Assembly in an emergency special session.[81] The resolution included a request to the International Court of Justice "to urgently render an advisory opinion".[82] It concluded that the barrier violated international law.[83] On 20 July 2004, the UN General Assembly accepted another resolution condemning the barrier with 150 countries voting for the resolution.[84] Only 6 countries voted against: Israel, the US, Australia, Micronesia, the Marshall Islands and Palau. The US and Israel rejected both the verdict and the resolution.[84] All 25 members of the European Union voted in favour of the resolution after it was amended to include calls for Israelis and Palestinians to meet their obligations under the "roadmap" peace plan.[85]

The Red Cross has declared the barrier in violation of the Geneva Convention. On February 18, 2004, The International Committee of the Red Cross stated that the Israeli barrier "causes serious humanitarian and legal problems" and goes "far beyond what is permissible for an occupying power".[86]

Amnesty International, Human Rights Watch and other Human rights groups have protested both the routing of the wall and the means by which the land to build the wall was obtained.[87] In a 2004 report Amnesty International wrote that "The fence/wall, in its present configuration, violates Israel’s obligations under international humanitarian law."[88]

Canada recognizes Israel's right to protect its citizens from terrorist attacks, including through the restriction of access to its territory, and by building a barrier on its own territory for security purposes. However, Canada opposes the barrier's incursion into and the disruption of occupied territories. Regarding the West Bank (including East Jerusalem) as "occupied territory", Canada considers the barrier to be contrary to international law under the Fourth Geneva Convention. Canada opposes the barrier and the expropriations and the demolition of houses and economic infrastructure preceding its construction.[93]

Graffiti paintings on the wall by British graffiti artist Banksy

Graffiti on the Palestinian side of walled sections of the barrier has consistently been one of many forms of protest against its existence. Large areas of the walls feature messages relating to the Israeli-Palestinian conflict, demanding an end to the barrier, or criticizing its builders and its existence ('Welcome to the Ghetto-Abu Dis'). In August 2005, the U.K. graffiti artist Banksy painted nine images on the Palestinian side of the barrier.[94] He describes the barrier as "the ultimate activity holiday destination for graffiti writers", and returned in December 2007 with new images for "Santa's ghetto" in Bethlehem.[95] The Times headlined the graffiti project "Let Us Spray". On June 21, 2006, Pink Floyd's Roger Waters wrote "Tear down the wall" on the wall, a phrase from the Pink Floyd album "The Wall".[96] 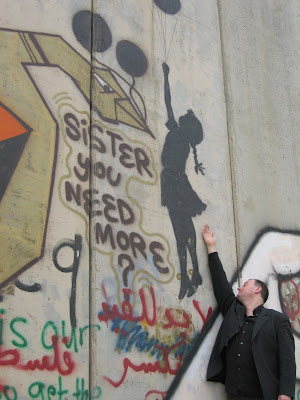 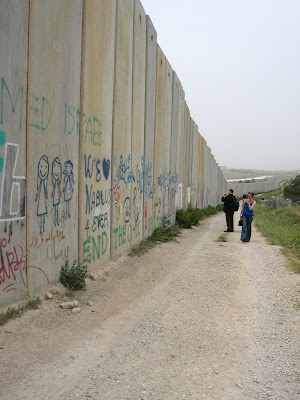 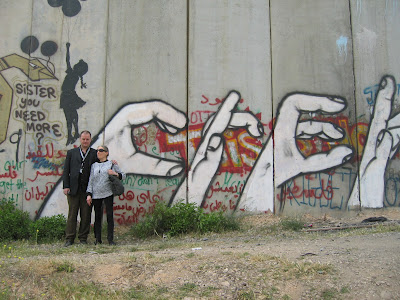 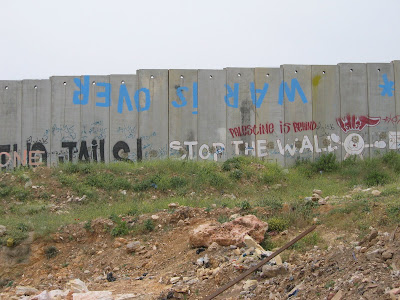 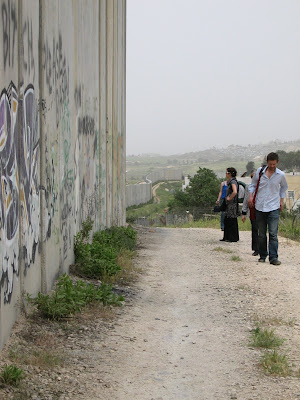 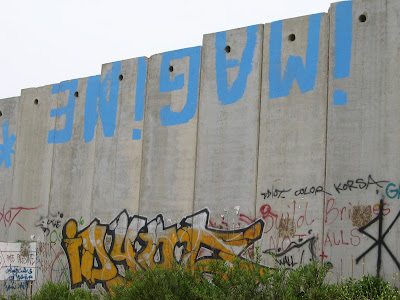 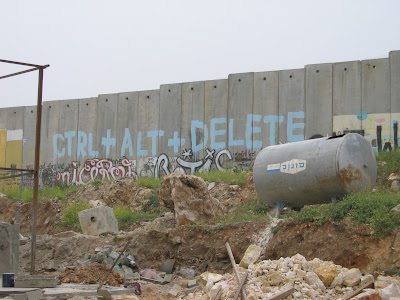 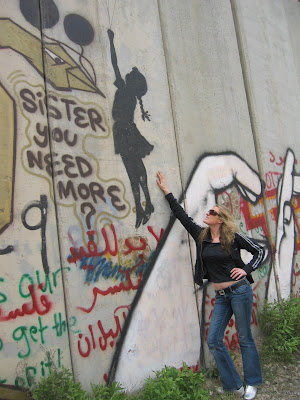 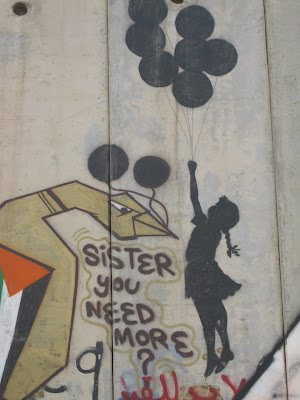 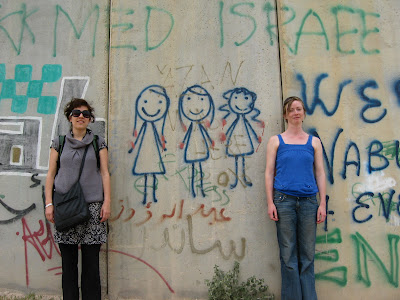 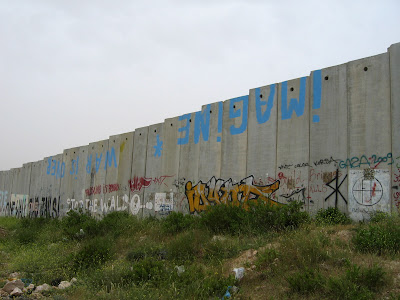 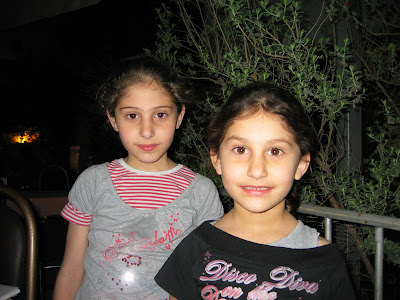 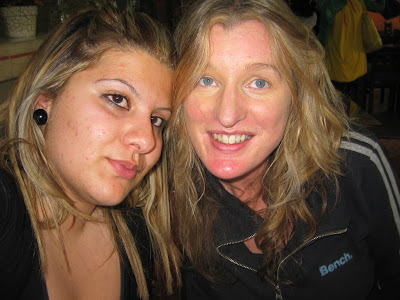 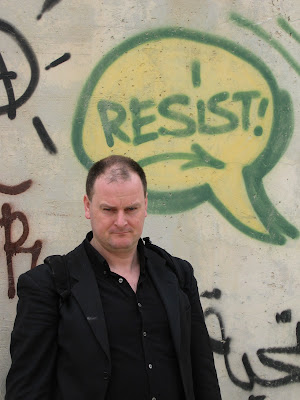 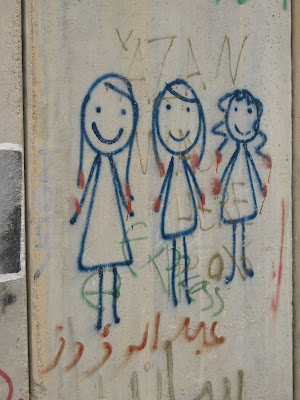 Email ThisBlogThis!Share to TwitterShare to FacebookShare to Pinterest
Labels: Pondering the Wall with IMDT