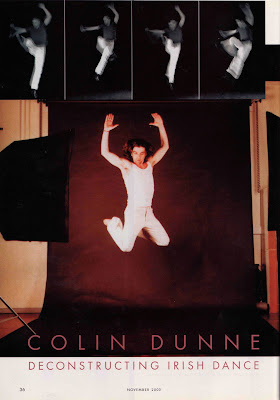 I'm absolutely thrilled to see the artistic justice (I sometimes wonder if this exists!) in Colin Dunne's nomination for an Olivier Award for "outstanding achievement" in his groundbreaking and touching solo performance "Out of Time". It's even more poetic that the Olivier Award nomination coincides with the 15-year anniversary of Riverdance, signifying how far Colin Dunne has moved his artform on since he took over as lead dancer from Mr. Flatley in 1995. In this 2003 DANCE MAGAZINE feature I wrote on Colin, who was at the beginning of a massive and scary artistic odyssey into his own practice, he was performing "Trading Taps" (which he choreographed with Tariq Winston) at Radio City Music Hall. It was quite an adventure for me, I'll tell you, rubbing shoulders with the Rockettes when I walked through the stage door there to interview Colin up in a Radio City rehearsal room. (The things we take for granted!). From this vantage point, seven years on (it has been a long, consistent journey, full of integrity and stick-with-it-ness for Colin), it's poignant that I clued into the fact that Colin spoke then "like an artist in the middle of some risky and as yet unspecified work-in-progress". Well - that "work-in-progress" has culminated in "Out of Time" - and his Laurence Olivier Award nomination for Outstanding Achievement. There's a lot more to be said (and indeed I have written a lot more about his artistic journey already), but I'll leave it at that for now. Watch this space! Keep watching this artist! Congratulations and well deserved, Colin Dunne. 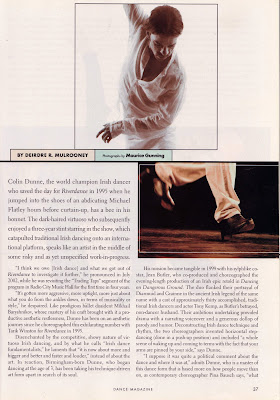 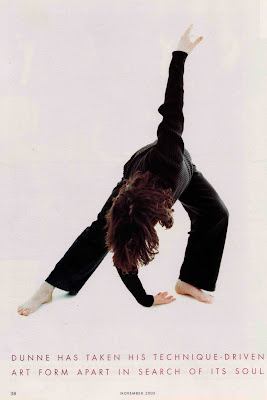 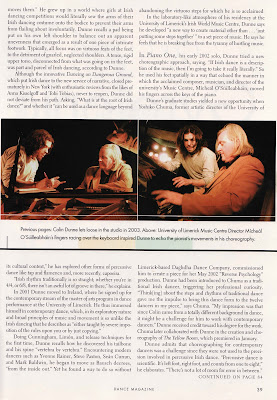 You certainly have impeccable taste! Colin deserves this award so very much. Whether you're a dance fan or not, you will be completely absorbed, then blown away by this intimate encounter with Colin's artful presentation of his search for meaning and connection through this medium. He has taken "Irish" dance to a new level. I would recommend this show to everyone. Well done, Colin!