It has been a busy few months.  Apologies, I haven't been able to update my blog in a while, but now that the sun came out, and exhibitions are well and truly launched, I am going to attempt an update today.  A couple of months ago I went on a little jaunt down to a secret Mecca in the middle of nowhere to catch up with Anica Louw and hear about her Longford Dance Festival.  Here is the feature I wrote on this happy and inspiring topic that was published in the Irish Times on April 13th: 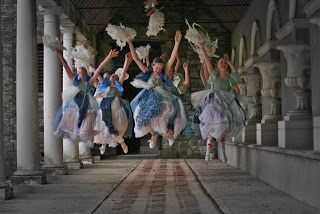 The middle of nowhere in County Longford is not the most obvious spot to stumble upon an international dance Mecca.  But that is exactly the kind of strange fruit that has sprouted up on a former dairy farm just outside Legan since the arrival of South African ballet dancer, actor, and expeditionista Anica Louw in 1978.  Intending to take a short breather from a series of far-flung archaeological expeditions, the intrepid Anica came to visit Longford farmer Philip Dawson who she had met in South Africa while he was doing a stint there as a young engineer.  The rest is dance history.

Soon, the diminutive South African was teaching ballet to Longford locals.  Philip converted one of his barns into a dance studio, engineering a pulley system to fold old bus seats up into the barn ceiling, tucked away until they were needed for end-of-term performances.  Gradually he built more studios, a summer house and kitchen, a dinky tree house, and dormitories for the dancers who would eventually find their way to this Annaghmakerrig of dance – mostly through word of mouth.  The cattle were sold in 2000, and a rambling forest of 150,000 broad leaf trees were planted for artists to wander through while dreaming up new creations.  Michael Keegan Dolan’s internationally renowned Fabulous Beast Dance Theatre have created all but one of their shows in this magic space.

You are hit by creative ions floating around the farmhouse courtyard the minute you set foot in Shawbrook.  You could run into anyone here, from London opera composers and costume designers, to Royal Ballet dancers like Simon Rice and Slovakian contemporary dancer Vladislav Soltys - who will both be judging the Irish National Dance Awards, and giving masterclasses in the 2012 Longford Dance Festival.  Liam O’Maonlaoi is a recent addition to the Shawbrook Pantheon too after creating “Rian” here last year with Fabulous Beast Dance Theatre.

When I arrive on St. Patrick’s weekend, I am greeted in the summer house by Anica and Faroese dancer Kristina Sorenson Ougaard who is here on a residency mentoring Shawbrook Youth Dance Company.  Kristina and her Faroese colleagues composer Jens Thomson and actor Kjartan Hansen are about to create a show inspired by Faroese mythology called “A Voyage into the Faroes”, to premiere in Anica’s “Longford Dance Festival” at the Backstage Theatre in four weeks time.

They are regrouping after their St. Patrick’s Day Flash Mob in Longford.  The next Shawbrook Flash Mob, this time to Leonard Cohen’s “Hallelujah”, sung live by Melanie Zink, will be unleashed on Longford Town Square at 1pm on April 12th to launch the festival. 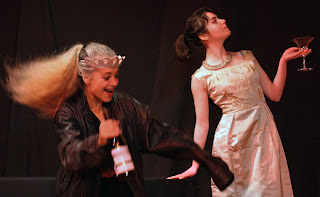 Anica, now in her 60’s, is just back from a session on a Longford treadmill “on its steepest incline” wearing a stuffed backpack, training for her next solo expedition. No less of a free spirit than she ever was, her most recent expedition was to be to Lhasa, but when she got as far as Kathmandu, access to Tibet was unexpectedly closed so she settled for climbing in the Himalayas instead. Together with Chantal McCormick of Fidget Feet aerial dance theatre company, who lives closeby in what has turned into a most unlikely artist’s hamlet (Keegan Dolan and other dancers are also neighbours), they brought a show called “Invoke” to the famous Burning Man Festival in Nevada Desert in 2010. McCormick will also be giving a workshop in the imminent festival.

Sorenson Ougaard tells me she first came across Shawbrook when, “blown away” by Keegan Dolan’s “Giselle” at the Barbican Theatre in London, she got in touch and followed the crumb-trail to the place of Giselle’s creation.  A graduate of “The Place” school of dance in London, Kristina signed up for Shawbrook’s Advanced “E” Course, with Keegan Dolan.  This led to her current Shawbrook residency and to the creation of her Faroese co-production which will be shown in Torshvan, Faroe, one of the world’s smallest capitals after its Longford premiere.

Anica has started, and continues to nurture many careers in dance here, but her biggest success story is that of local Marguerite Donlon, whose Donlon Dance Company in Saarbrucken, Germany, is now one of the most renowned contemporary dance companies in mainland Europe.  In 1980, at the age of 15, Donlon was a champion Irish dancer who loved to dance, sweeping the boards at Feiseanna Ceol.  Though late to start for a ballet dancer, Louw, who had just arrived, took Donlon on, and soon Donlon’s extraordinary Bournonville-style footwork catapulted her from performing for Peter Schaufuss in the English National Ballet, to being a soloist in the Deutsche Oper Berlin.  Donlon’s innate choreographic flair brought her to Saarbrucken where she established her own Donlon Dance Company.  In 2001 Anica’s 2nd Longford Dance Festival introduced Donlon’s unique mix of traditional Irish footwork and ballet back home to Longford’s Backstage Theatre.

As well as “A Voyage into the Faroes”, the Festival, whose remit is to nurture local contemporary dance will also feature Louw’s own ballet “Pearly Beach”, named after a beach the Festival Director and Founder grew up near on the South African Cape.