Just back from a fantastic conference at NUIG entitled "Ireland and the Emergency", with so many fascinating contributions, and a keynote by Robert Fisk, no less, who revisited the subject of his PhD at TCD on The Emergency - looking at it in context of his work in the Middle East at the moment.  Brilliant!  Yesterday morning (Saturday) I too contributed, giving a paper entitled "Emergency Encounters of the Cultural Kind", and was delighted of the opportunity to do so.  Big thanks to Dr. Mark Phelan and the Conference Organisers!  It is always such a breath of fresh air to get down to Galway, where as well as the food for thought (no wartime rationing there!), last night I discovered the oasis that is The Heron's Rest B & B on The Long Walk.  If you ever get a room there you will be very lucky, the view over Claddagh Quay is dreamy, the food, scrumptious, the vibe, perfect. 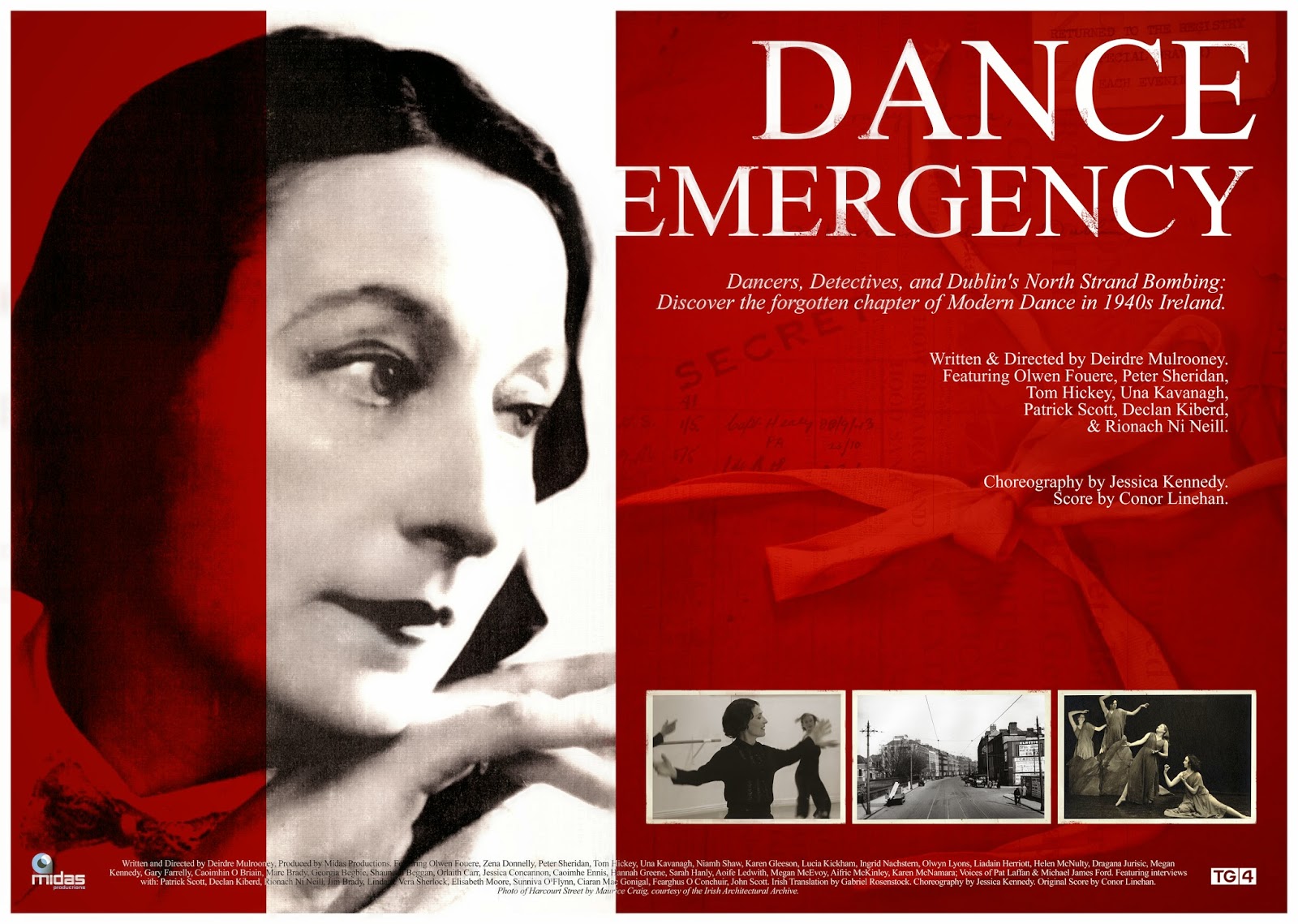 Luckily I have the best excuse ever to return to Galway very soon again, for the screening of the 52 minute documentary I have been working on for a few years now, "Dance Emergency"/ "Damhsa na hEigeandala", on July 10th at noon in the Cinemobile along with a special screening of "1943 - A Dance Odyssey".  Would be so great to see you there, at my favourite film festival, if you are nearby,  Here is all the info and a few images to hopefully whet your appetite:

Oh, and the trailer!:

Against the backdrop of seldom-seen 1940’s bohemian Dublin, and suspicions of Nazi espionage, we recount an Irish-German artist’s forgotten struggle to bring Modern Dance/ German Ausdruckstanz to a conservative, inchoate Ireland that was not yet ready for it.

Once upon a time, during World War Two (or "The Emergency", as it was known
in Ireland), enigmatic Irish-German woman Erina Brady brought cutting edge
Modern Dance to Ireland, from Germany.  A forgotten reel of film by Irish film industry founder Liam Ó Laoghaire immortalised the mysterious modern dancer teaching her tiny pupils in her Harcourt Street Studio and dancing freely in the open air in his 1943 gem of a film, "Dance School".

Setting eyes on this rare footage for the first time, 1943 -- A Dance Odyssey brings five of Brady's former tiny tots on an odyssey to a bygone era in her enchanted Irish School of Dance Art studio.

Seventy years on, 1943 -- A Dance Odyssey, explores who were these tiny
dancers, attempting an arabesque, and stretching out their little limbs in
barefoot dance of expression? Where did the dance of life take them?

Unlocking fond memories of those extraordinary classes the women share how
The modern dance pioneer influenced their lives, and opened them up to a
lifetime of creativity.

"The past was... another country in ‘1943 - A Dance Odyssey' in which three
sisters and two other women revisited the Harcourt Street premises where
German-Irish Erina Brady had taught them modern dance 70 years earlier.
Their reminiscences of this exotic, bohemian woman were touching and there was a
haunting and affecting quality to Deirdre Mulrooney's short film"...
(John Boland, Irish Independent Weekend Review, April 6th, 2013).