Abracadabra!: Another thing about India... 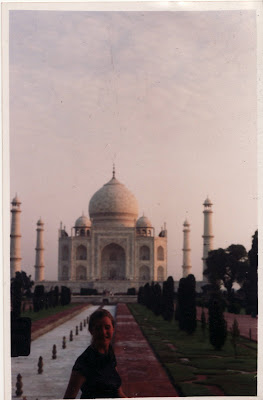 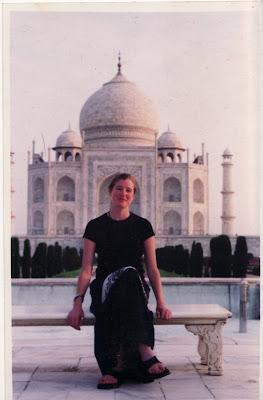 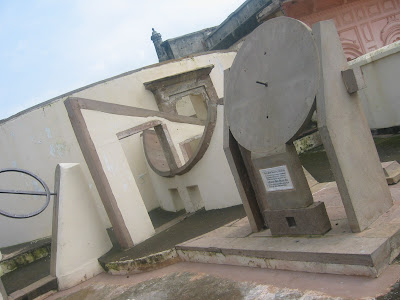 (Yup, that's me on the "Diana Seat" in front of the Taj Mahal - as seen in Slumdog Millionaire!). I hope it wins the Oscars, if only for the fairytale Bollywood Dancing at the end! What does the Jantar Mantar of Jaipur predict, I wonder? 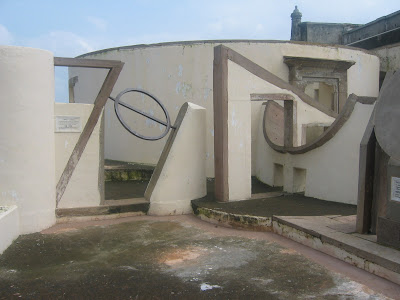 Superstition is big in India - as you will see here from the incredible "Jantar Mantar"
of Jaipur. The ruling class consulted these giant zodiacal/astronomical sculptures to figure out
how to rule their kingdoms, and how to do pretty much everything, basically. I think this one here is the sculpture for Capricorn, so you could really walk around the movement of the planets in live-action shadow figuring out what the future held in store for you ... Incredible! Here is a quote on the Jantar Mantar (great name), from Wikipedia:
"The Jantar Mantar is a collection of architectural astronomical instruments, built by Maharaja (King) Jai Singh IIat his then new capital of Jaipur between 1727 and 1734. It is modeled after the one that he had built for him at the then Mughal capital of Delhi. He had constructed a total of five such labs at different locations, including the ones at Delhi and Jaipur. The Jaipur observatory is the largest of these.
The name is derived from yantra ("instrument"), and mantra ("formula", or in this context "calculation"). Therefore jantar mantar means literally 'calculation instrument'. In local Rajasthani dialects, it is often seen that 'ya' syllables are casually pronounced as 'ja'. For instance, 'yatra' (journey) will often be referred to as 'jatra'. Moreover, the way locals interpret the name is not as its literal meaning, it is suspected that by 'jantar-mantar' they mean 'magical words', 'abracadabra' or 'tantric incantations'.
Posted by Deirdre Mulrooney