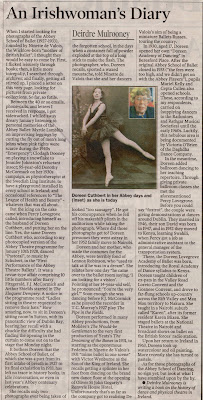 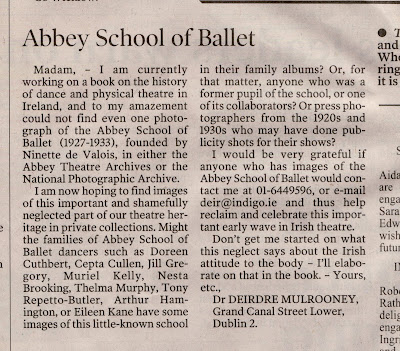 The discovery of these lost Abbey School of Ballet photographs (below, previous post), was part of a long quest. First, there was the 2004 RTE Radio Series, "Nice Moves"; then, there was the adjacent letter to the Irish Times, on December 31st, 2004; then there was the discovery of hidden gem, Doreen Cuthbert, and the consequent Irish Times Irishwoman's Diary (also adjacent - click on it to enlarge), about her extraordinary life and contribution, on March 12th, 2005. Then came the publication of "IRISH MOVES" in 2006 - but still no photographs. It wasn't until 2008, as a result of the book being seen by a certain person who shall for the moment remain nameless, that the below SEVEN lost images re-surfaced. Let's hope we'll get to exhibit them for the public very soon, along with broadcasting Doreen's wonderful interview... Getting closer... Keep watching this space!
Posted by Deirdre Mulrooney