Yeats and the Arts Conference at NUIG Moore Institute 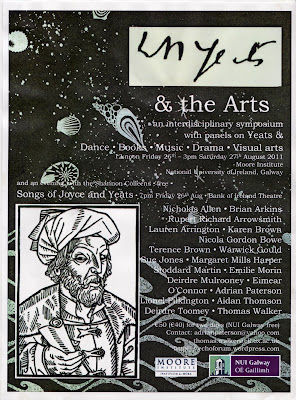 It was an honour to be part of this fantastic conference on "Yeats and the Arts", organised by Adrian Paterson and Thomas Walker at NUIG's Moore Institute at the weekend. It certainly was an erudite gathering! So while I was fairly intimidated delivering my paper on "Late WB Yeats's Late Bodily Visions" in front of such a pantheon of Yeatsians, it was so worth it to hear the wealth of insights, information, and, yes, footnotes from everyone else present! An extremely stimulating, thought-provoking, and enlightening weekend. I particularly loved all the visual art - there was loads of that, and publishing projects, in Yeats's milieu. Of course there was, with his father and brother being painters, and his sisters being wonderful craftswomen, and publishers. It was also nice to think again about scansion of verse, after not thinking about it for such a long time. Terrence Killeen was a particular beacon of verse scansion - the three sentences in Among School Children, for example. I could go on, and on and on and on, but I'll save it for another occasion. Massive thanks to the organisers, and the other participants.

Email ThisBlogThis!Share to TwitterShare to FacebookShare to Pinterest
Labels: Yeats and the Arts Conference at NUIG Moore Institute

Nice to take the plunge in the Clare Champion this week... 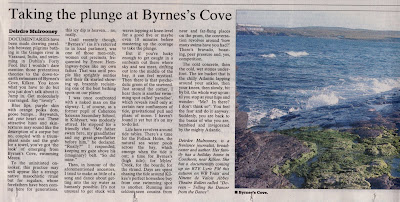 
Yesterday, I interviewed photographer Sean Hillen about his eerie and insightful exhibition “Ghost Shops”. Photographing these tragic yet visually marvelous scenes of post-Celtic Tiger Ireland ‘through the looking glass’, made Hillen reminisce about the ‘famine evictions’ of yore, and wonder at how history can repeat itself.

Catch the final week of this poetic and somewhat disorienting exhibition before it ends at 5pm this Sunday! To get there, climb the stairs to the summit of “Base Camp”, on Middle Abbey Street (opposite Epicurean Food Hall, beside Arnotts), and behold the vertiginous view. (With sugar levels in mind, sweets & chocolate await you at the top). A hidden gem of an exhibition, in an exciting new space, we are sure you will agree. And thought-provoking too.