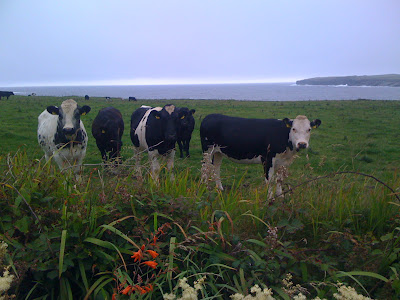 "The cow is of the bovine ilk.
One end is moo, the other Milk"
Ogden Nash
Posted by Deirdre Mulrooney 2 comments:

Email ThisBlogThis!Share to TwitterShare to FacebookShare to Pinterest
Labels: Moo 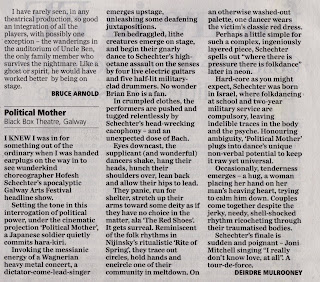 The more I think about Hofesh Schechter's "Political Mother" which I saw at Galway Arts Festival on Tuesday night, the more I think it's like The Green Table of 2010. There is definitely something very masculine, and very Kurt Jooss about it. Also, what about those earplugs? Was that a kind of ironic, "motherly" act, to feign interest in the health of our ears? Or did they really care? Or just if you don't want to hear this unsavoury message, plug your ears to the noise, in a sort-of metaphoric way? Well, this is a piece that certainly keeps you thinking long after you have left the theatre. It's on for three more nights, and is definitely worth a look-in if you are in Galway. Above the review in today's Irish Independent. The Alice Maher/Trevor Knight show at Galway Arts Centre was the other standout. Beautiful, strange and dreamy. Ready for some comedy now...
Posted by Deirdre Mulrooney 3 comments: 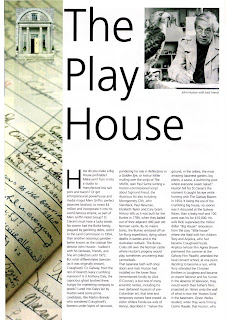 It's dawn, I'm packing my bag to go to Galway Arts Festival, and St. Cleran's is on my mind. I recently had the good luck to run into Anjelica Huston (yes, Morticia herself), at the opening of "Bookworms" at the Abbey, and we had a nostalgic chat about St. Cleran's, where she grew up outside Galway. Then there was a great documentary about St. Cleran's, the Huston's, and the making of "The Dead" on RTE lately. So I was curious to dust off this feature I wrote a long time ago, when I stayed there during its Merv Griffin incarnation, and read "The Hustons" by Lawrence Grobel. Hm can't figure out how to get page 2 of the PDF up here as a jpg right now, but will get back to it... Watch this space... In the meantime - rachaidh go Gaillimh.
Posted by Deirdre Mulrooney 1 comment:

Many Bodies of Contemporary Dance Podcast live at www.create-exchange.ie 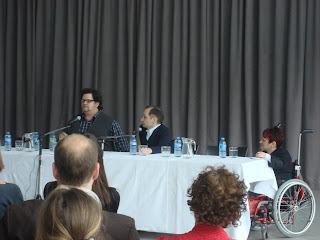 Listen to Raimund Hoghe (www.raimundhoghe.com) talking about throwing his body 'into the fight', Tere O'Connor talking about erasing the visual, and honouring ambiguity (www.tereoconnordance.org), Caroline Bowditch (www.girljonah.org) being her inspirational self "Dance Agent for Change", John Scott - talking about his work with Survivors of Torture (www.irishmoderndancetheatre.com), at www.create-exchange.ie. Fantastic food for thought! Chaired and curated by moi. What a gathering of thoughts, experiences, articulations - perfectly cast, I have to say. Click right here to listen.

Thanks to Create, ADI Ireland, Dublin Dance Festival, Dance Ireland and Gradcam - all partners in this May 19th event. www.creativedialogueireland.com was our attempt at democratic, virtual conversation on the topic - it still might take off? Go on - post a comment if you haven't already!
Posted by Deirdre Mulrooney 3 comments:

Email ThisBlogThis!Share to TwitterShare to FacebookShare to Pinterest
Labels: Many Bodies of Contemporary Dance Podcast at www.create-exchange.ie

The Discovery of Vimeo

Haven't figured out how to embed this here yet, but in the meantime, here is a link to that "Ogoki - Call of the Wild" audio slideshow on Vimeo:

First of all, after a day immersed in iphoto, idvd, imovie, garage band, protools mbox, quicktime, iweb, youtube, and - there has got to be more, my head is fairly addled now - here is a link to my latest, painstakingly-made podcast! It is the audio to accompany my four-minute youtube slideshow - from which youtube removed the audio, believe it or not, because of a fleeting snippet of Neil Young's "Helpless". (Is that ironic?) I'm sure Neil Young would be delighted for his lyrics to accompany the open-source story of Ogoki Post, and Charlie Wenjack, way up in North Ontario (wouldn't you, Neil? I just don't have your personal email address - see? You can contact me here and I'd love to hear from you;).
Posted by Deirdre Mulrooney No comments:

Email ThisBlogThis!Share to TwitterShare to FacebookShare to Pinterest
Labels: Ogoki: Call of the Wild. Part One.

Ogoki: Call of the Wild. Part One. Audio & Visual. Separate.

But anyway, after ALL THAT (& I thought it would take about half an hour in all), I thought I might be able to upload the slideshow from my desktop. But alas it was not to be. No matter how many times I achieve these technical feats, I completely forget how to do it again by the time I go back to emulate my former glory. Beginner's mind? Methinks I suffer from a severe form of technical amnesia...

The podcast of this late 2008 BCI-funded radio documentary vanished out of the ether, so I have decided to launch it out into the virtual world again myself, in ten small episodes of about four minutes each, but this time as audio-slideshows. Why not give this story immortality, if modern technology will allow me to? Here is the blurb, just one more time, in case you are seeing, and hearing it, for the first time:

OGOKI: CALL OF THE WILD

An isolated Indian reservation in Northern Ontario, Canada is the setting for “Ogoki - Call of the Wild”. It was here in the 1970s and 80’s that the Mulrooney Family, from Limerick lived for seven years. Over two decades later Deirdre and her mother Mary return to the reservation and hear the Ojibway Indians share their shocking and moving history.

This BCI-funded radio documentary was broadcast on Newstalk on December 20th, 21st, and 25th, 2008.

Ten more micro-episodes to follow! (It's 45 minutes in all). Hope you enjoy it, and learn something you didn't know before. I sure did. (& that completely separate from all the techie stuff!)
Posted by Deirdre Mulrooney No comments: